Inside In-Housing: A Trend or an Evolution?

The arguments around in-housing have moved on from whether it’s right or wrong for brands and onto more nuanced considerations, as OLIVER’s Sam Jacobs, &Friends’ Matt Carroll and ITV Creative’s Tony Pipes discussed with LBB’s Laura Swinton. 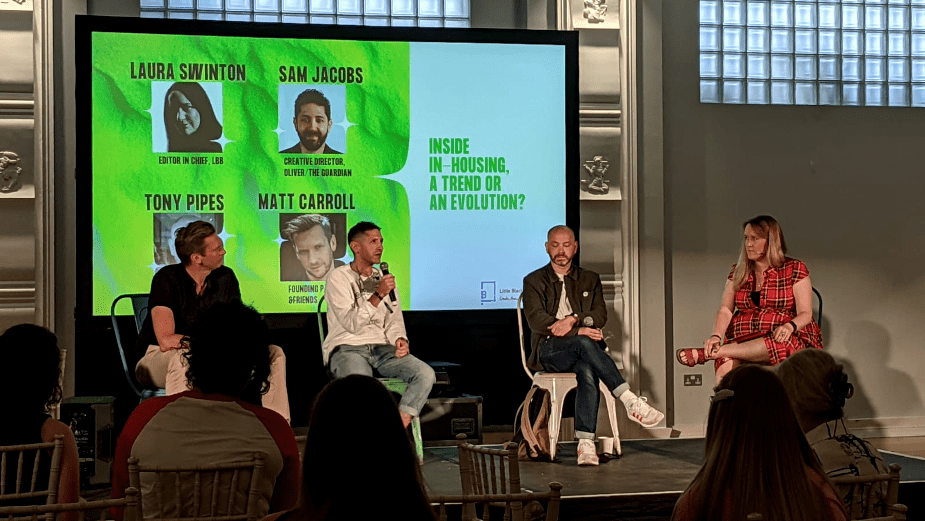 Taking to the sprung floor of Dreamland’s grand Ballroom as part of the UK Creative Festival, LBB’s Laura Swinton was joined on stage today by three panellists with intimate experience of in-house creativity. And over 45 minutes they helped the audience to understand the fundamentals of how it really works and whether it’s just an industry trend or an evolution of the business that will endure.

Aware that the audience likely contained students with limited knowledge of the subject, the session kicked off with the essentials: What is in-housing? The panel gave a range of answers, from “literally in the building,” put bluntly by ITV Creative’s Tony Pipes – whose agency grew organically out of the creative business of the TV channel itself – to the models of &Friends and OLIVER, which deliberately build bespoke teams within clients’ brands.

Sam Jacobs, who’s spent years working in-house at the Guardian through OLIVER, explained the strength of being in at a brand with a creative core. “We can plug in when we need to,” he explained, whether that’s the global creative, editorial or strategy arm of the Guardian.

Not all brands have that “creative core” of the Guardian or ITV though, as Laura highlighted. So how does an in-house agency stay as inspired when they’re working with a different kind of brand? The panel’s response: that core is a nice-to-have, not a must. Look at the consistent comedic brilliance of Specsavers’ advertising – even something as prosaic as an optician can exemplify creative brilliance.

Matt Carroll of &Friends detailed the way an in-house approach can allow a brand to flex up and down for different tasks, noting that working with Vodafone, for example, some teams work on the “bigger picture piece” while the client also launches products in play with teams built specifically for those tasks.

The theme of trust reared its head throughout, whether that’s assuring the Love Island team that ITV Creative can “really get under the skin of” it despite the sensitivities and secrets of the reality TV phenomenon, or the general “knowing you can go there with them” feeling of your colleagues being your clients, added Matt.

Tony reflected that it promotes a “better class of creative” work when people work on a single brand that they love. They also noted the creative risk taking that this promotes, candidly admitting that as Sam said, it’s “much harder to get fired.”

They stressed the value of external creative too, advocating for specialist expertise and injections of “fresh thinking”. While heading up an in-house agency, Tony is clearly also inspired by partners ITV works with like Uncommon and Aardman.

Conscious that some in the room might be at the start of their careers, Matt, Sam and Tony agreed that working on a variety of clients externally was a good foundation for anyone looking to work in house later, although for those looking to develop client-facing skills there’s nowhere better than in-house. All three agreed (maybe half-jokingly) that creatives inevitably also become account managers to some degree.

The question of whether this creative trend will last was of course easy to answer for this panel of in-house creative advocates. In-house agencies are the norm now and will continue to be. Not having one will be unusual going forward, like not having Microsoft Word, suggested Sam. But Matt ended on a word of caution for brands looking to invest in in-house capabilities. Getting it right is “crucial but also risky”.